On a little recon mission yesterday I entered in a $28 tournament (with a $10 rebuy) at Joker’s Wild casino in Henderson, NV. 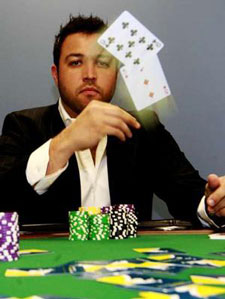 The opening hand I was the button and was dealt 7h-7s. There were two limpers to me. I was not really interested in building a big pot with a medium pair so I limped as well. This allowed the small blind to come in cheaply and the big blind for free. (Mistake #1).

The flop was Jc-7c-10s. Both blinds check. Middle position bets 100. The cutoff calls 100. On the button, I raise to 500 to protect my set against both flush and straight draws. Middle position calls, cutoff folds.

The turn is the Qs. Middle position checks. I check (Mistake #2).

I show 7s full of Jacks. Middle position shows J-10o for Jacks full of tens. I am felted on the opening hand.

Mistake #1 – Not raising on the button. 7-7 is a middle pair and on the weak end of starting hands. However, the combination of being on the button and it being the first hand of the tournament (where no one wants to bust out) should have led me to raise. With two limpers already in and the two blinds left, a raise to 300 would have probably driven out the blinds, and perhaps the J-10 that ultimately felted me. The other player told me he held K-Jo.

Mistake #2 – Not betting on the turn. The queen of spades froze the betting on the turn, but it should not have. If the opening bettor had held 8-9, the Qs didn’t change much. Its unlikely the middle position player held A-K since he didn’t open raise preflop or bet against two flush draws on the turn.

I needed to bet here to further define my hand. I had 1,900 left in my stack and the pot was 1,350. A full shove here is not out of the question since a pot-sized bet is more than 70% of my remaining stack.

Mistake #3 – Snap shoving to the minimum raise on the river. This is a rather common play in a low buyin tournament because you don’t have a lot of chips to begin with. The minimum raise had me covered. I didn’t even take a beat to think about folding my full house. If I fold I still have 950 chips, which is 19 big blinds.

In the end, I should have taken a beat to consider J-10 and Q-J. These are easily two possible holdings in a low buyin tourney on the first hand. J-10 flops top two pair and would definitely lead out, call a flop raise and check on the turn out of position. Q-J flop top pair and turns top two pair. It’s unlikely that Q-J would check the the turn and risk the check behind, so it’s a less likely holding on the river.

The really leaves A-J, K-J, J-10 and 8-9 as the only real holdings that could have been played out that way. I beat three of the four hands that are likely to be held, I lose to one of them. The other player held that one.