Although I have played poker recreationally and semi-professionally since 2004, I still play  a lot of low stakes poker, $2-4 limit, $3-6 limit, $4-8 limit and $2-6 spread limit. Depending on where you play these games can be straight limit stakes, half-kill or full-kill games. 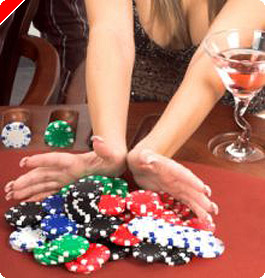 Low stakes poker is a fantastic way to get introduced to the game. You can learn how the game is played and managed in a brick-and-mortar casino without being overwhelmed by massive amounts of money on the table or hyper-aggressive players.

A lower stakes game can be bought into rather inexpensively. At the casino I deal in, the minimum buyin for the $2-4 limit game is $20. Although I would recommend buying into any game for more than ten big blinds, I see it done quite often. Realistically, you should probably buy in to a $2-4 limit game for between $60 and $100. For a $3-6 limit hold’em game, I would suggest buying in for $100. Many people buy in to a $4-8 game for $100, but I would recommend $200.

If you have only played in home games or have just watched poker on television you are going to find casino play quite different. Casino cash games are faster paced than home games. (though quite a bit slower than online poker rooms). Casinos try to get out 35-40 hands per hour in order to rake enough to pay for the dealer, the floor supervisor and (in some cases) the rent on the automatic shufflers.

Instead of a table of your buddies and co-workers, the table makeup of a casino low stakes game has infinite possibilities: retirees, newcomers, action junkies who leave the game every 10 minutes to play a slot machine, players who slow the game because they can’t see or hear very well, social butterflies, players who think they are the next Phil Hellmuth…the table will run the gamut.

Now that you have the bankroll and the urge, it’s time to check out some low stakes poker.